T — info@gruppocarli.com —
Home / News / Fatty acids, the common denominator between alfalfa and the quality of meat

The advantages of using alfalfa in feeding meat animals

In writing this article we started from the premise that animal feeding affects livestock productivity: for individual animals, it ensures adequate anatomical-functional development, whereas for the herd it makes it possible to achieve the full genetic potential and lead to its improvement. In terms of productivity and meat quality, in recent years science has focused on trying to make food increasingly nutritious and healthy. As a functional food, i.e. capable of positively influencing the physiological functions of the body and helping to reduce the potential onset of diet-related diseases, meat is the subject of animal nutrition plans, aimed at reducing the content of saturated fats and cholesterol, increasing those of long-chain omega 3 polyunsaturated fatty acids PUFA, with proven health benefits. In this regard, researchers, veterinarians, and nutritionists agree on the importance of correct animal feeding, which respects their natural biorhythm, as well as their well-being. As a matter of fact, a healthy and balanced ration prevents livestock diseases, thereby reducing medicine use in animal care, with positive effects on health safety and on the quality of the meat.

Irrespective of the type of animal and breed, there is extensive scientific research on the effects that animal nutrition has on the safety and quality of meat.

Since fodder forms the basis of an animal’s diet, we have decided to look at some of the most recent studies focusing on the effects of using alfalfa in animal rations that have been conducted by animal nutrition departments of Italian and international universities.

In 2016, the Italian Journal of Animal Science published the research “Feeding dehydrated alfalfa increases polyunsaturated fatty acids concentration in Marchigiana beef muscle” carried out by the University of Teramo, Department of Food Sciences. The animals were divided into two groups, the first group was given a feed containing 20% dehydrated alfalfa while those in the second consumed a feed with similar analytical characteristics but without dehydrated fodder. The results show how feeding with dehydrated alfalfa significantly increases the content of polyunsaturated fatty acids (P<0.05) and in particular linoleic acid (C18: 3n-3; P0.001) and arachidonic acid (C20: 4n-6; P0.01). 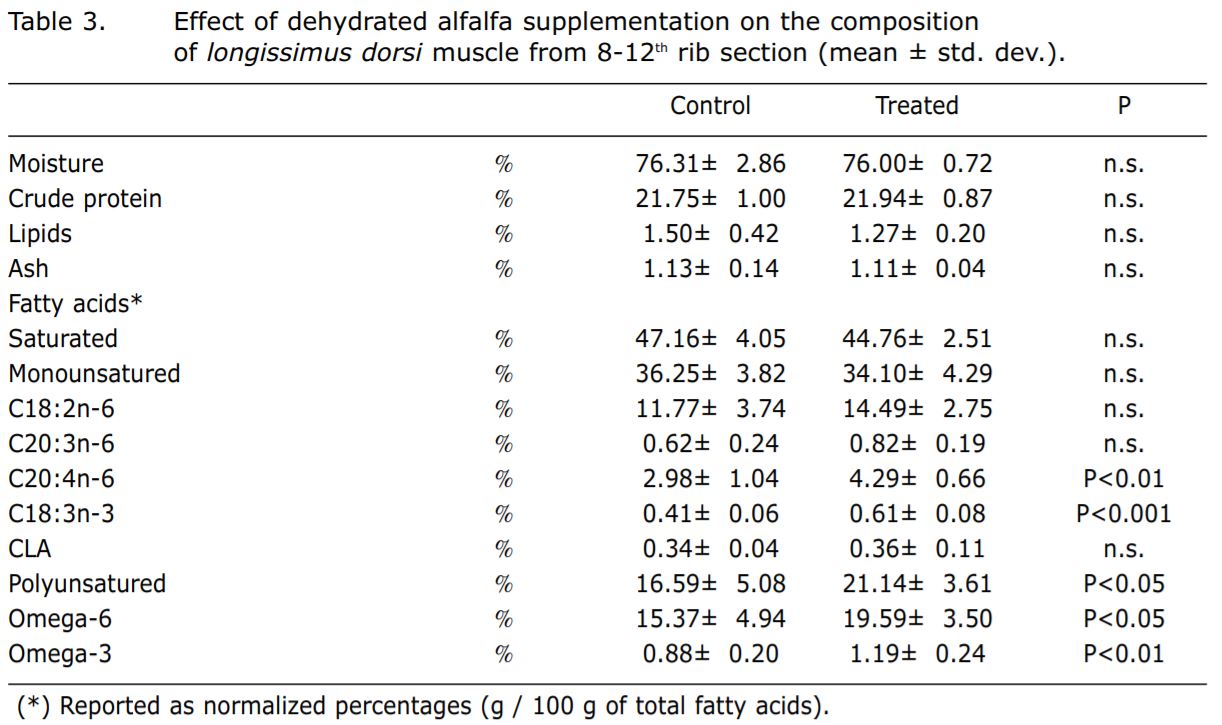 King Saud University, College of Food and Agriculture Sciences, Department of Animal Production of Riyadh published a study on sheep meat in 2016  “Effect of alfalfa hay on growth performance, carcass characteristics, and meat quality of growing lambs with ad libitum access to total mixed rations”. The animals were divided into four groups with varying concentrations of alfalfa in the ration. The study found that the animals that ate the largest amount of alfalfa hay experienced better rumen conditions, better feed ration conversion, and significant body weight gain. Likewise, the slaughter weight significantly improved. Furthermore, the study highlights that this type of diet is, as a whole, the most cost-effective option.

In 2018, the French research centre INRA in Toulouse, Station de Recherches cunicoles published the study  “A diet rich in alfalfa enriches rabbit meat with omega 3”.
The results show that increasing the amount of dehydrated alfalfa in the ration makes it possible to triple the amount of C18:3N-3 alpha-linoleic acid in the meat, compared to a diet without alfalfa.

Once again focusing on Italy, in 2011 the MPAAF (Ministry of Agricultural, Food and Forestry Policies) established a quality mark called ‘Sigillo Italiano’ (Italian seal) which implements the National Quality Scheme for Zootechnics, a production specification that pays particular attention to food safety, animal welfare, reducing the impact on the environment, transparency and traceability of farming systems.

Being aware of what cattle in the barn eat, knowing if farmers pay attention to their welfare and if the farming system is environmentally friendly means being conscious consumers, informed and sure about the meat to choose. 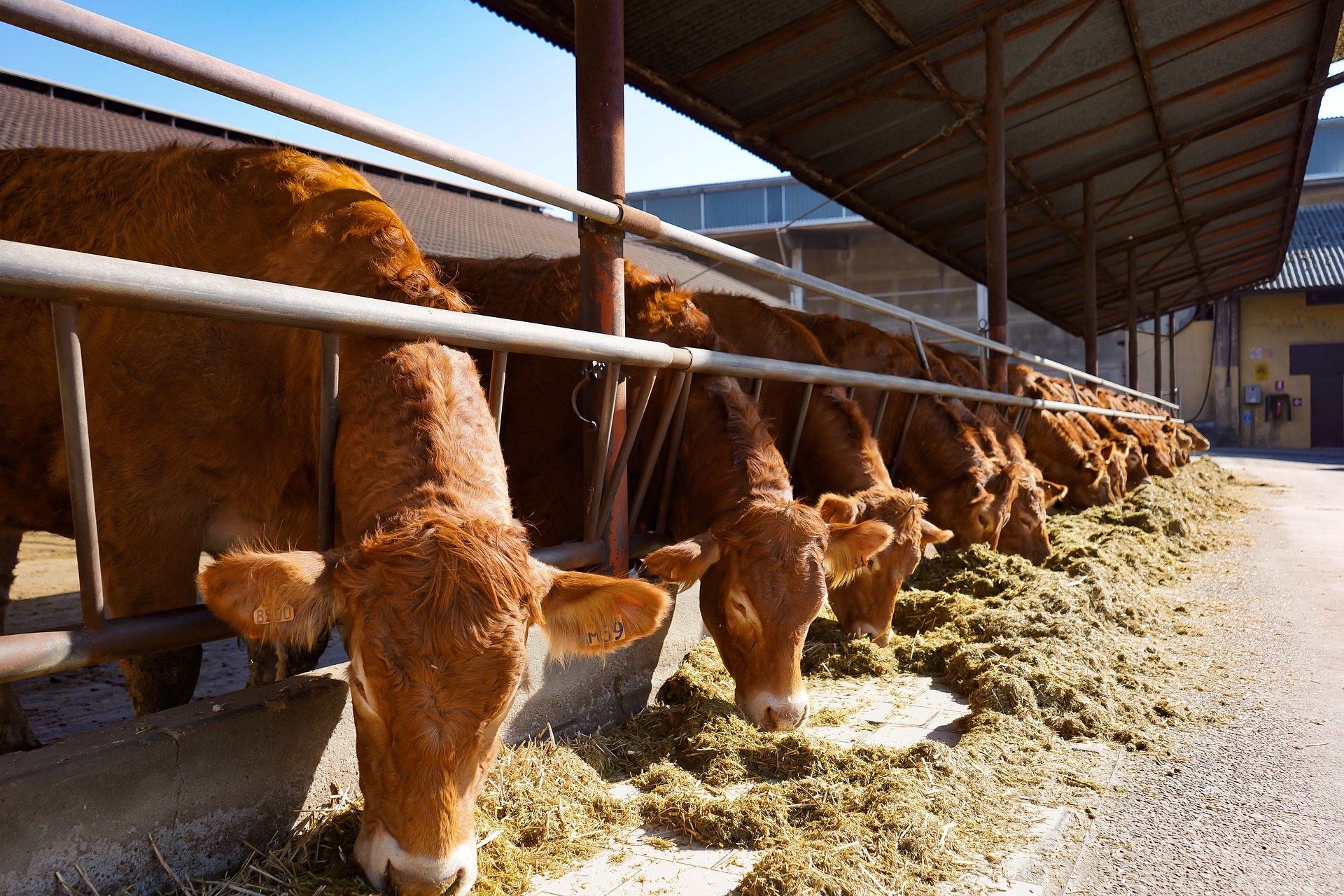 Protein and casein level are the main parameters for quality evaluation of milk, both technological and nutritional facts.

In human nutrition, milk is an important source of bioavailable calcium, branched chain amino acids, conjugated linoleic acid and proteins. In addition to calcium, several minerals are present in milk such as phosphorus, potassium, magnesium, zinc and selenium. Milk ...