The aim of haymaking is to retain and preserve all the nutritional elements present in the grass for as long as possible and guarantee healthy forage for animals.

When a plant is cut, it dies and the vital flow from the roots is interrupted; the plant cells then trigger enzymatic and metabolic processes that use up any available reserves. The substrata involved in this degradation are non-structural carbohydrates (or NSC, also known as soluble carbohydrates) such as starch, saccharose, glucose, fructose and other sugars (hexose plant sugars), which can be consumed for a prolonged period whilst the grass is wet. The plant continues the mechanisms of breathing even after being cut, until the water content falls below 12-13%. To block the loss of nutritional principles, it is necessary to accelerate the water evaporation process as much as possible, thus limiting the time the plant continues to breath. The process that makes grass turn to hay is only completed when the dry substance amounts to more than 88%. 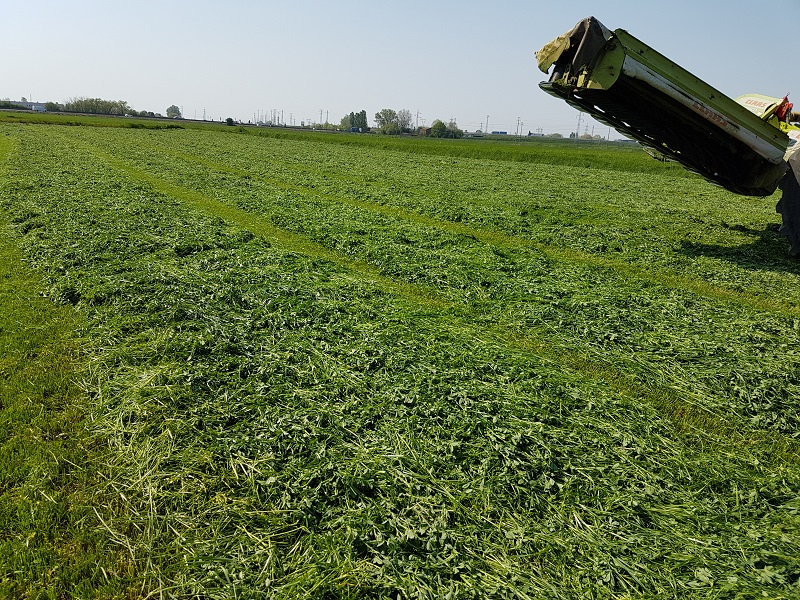 Combining conditioning with cutting and rapid drying makes it possible to optimize evaporation times compared to drying in the field. Mechanical conditioning leads to the break-up of the cuticular layer (consisting of waxes and cutin) that covers the stems and leaves of plants, increasing the surface area for realising humidity. By guiding the evaporation process inside drying facilities, the stabilization phase is speeded up and the use of energy by plant cells is considerably reduced.
Managing forage production in this way makes it possible to maximize the presence of sugars and prevent them from becoming a source of undesired secondary fermentations, which often occur during drying in the field due to residual humidity. Only thanks to two-phase drying is harvesting of a very young plant possible, cutting considerably earlier than usual, without risking forage overheating and mould building up.

Eliminating the risk of mould

In the storage phases, if we are operating in conditions of excessive residual humidity, the plant is exposed to attack from bacteria, yeasts and moulds that find an ideal environment for growth.
By applying a forced ventilation process it is possible to rapidly stabilize the product, interrupt enzymatic activity and growth of these substances, favouring establishment of the correct conditions for maintaining nutritional principles over time. Furthermore, thanks to this technology it is possible to reduce tedding operations in the field, an element of risk in terms of contaminating the feed with soil and stones. With the soil, spores normally present in the earth are transmitted and could cause health problems for the animals, contaminate the milk and jeopardize the quality of cheese.

Fibre digestibility is inversely proportionate to the age of the plant: the later it is cut, the less nutritional value the forage will have. Normally, for drying in the field, harvesting tends to be delayed so that the plant increases the amount of dry substance it contains, reducing the quantity of water that needs to evaporate. Without forced drying, it is very difficult to be able to store hay from a plant cut at a young age because the rate of respiration of its tissues will be very fast and with this the risk of a rapid loss of nutritional substances. Furthermore, leaving the plant to dry in the field for longer increases the probability of exposure to rain, a risk factor for washing out and losing soluble carbohydrates. Hay turning brown (so-called “tobacco-coloured hay”) is a sign that sugars and amino acids have reacted to each other due to high levels of humidity, becoming completely indigestible (Maillard reaction).
Harvesting a young product that will be subjected to forced drying, makes it possible to maximize the presence of digestible nutrients and significantly increase the value of the forage. 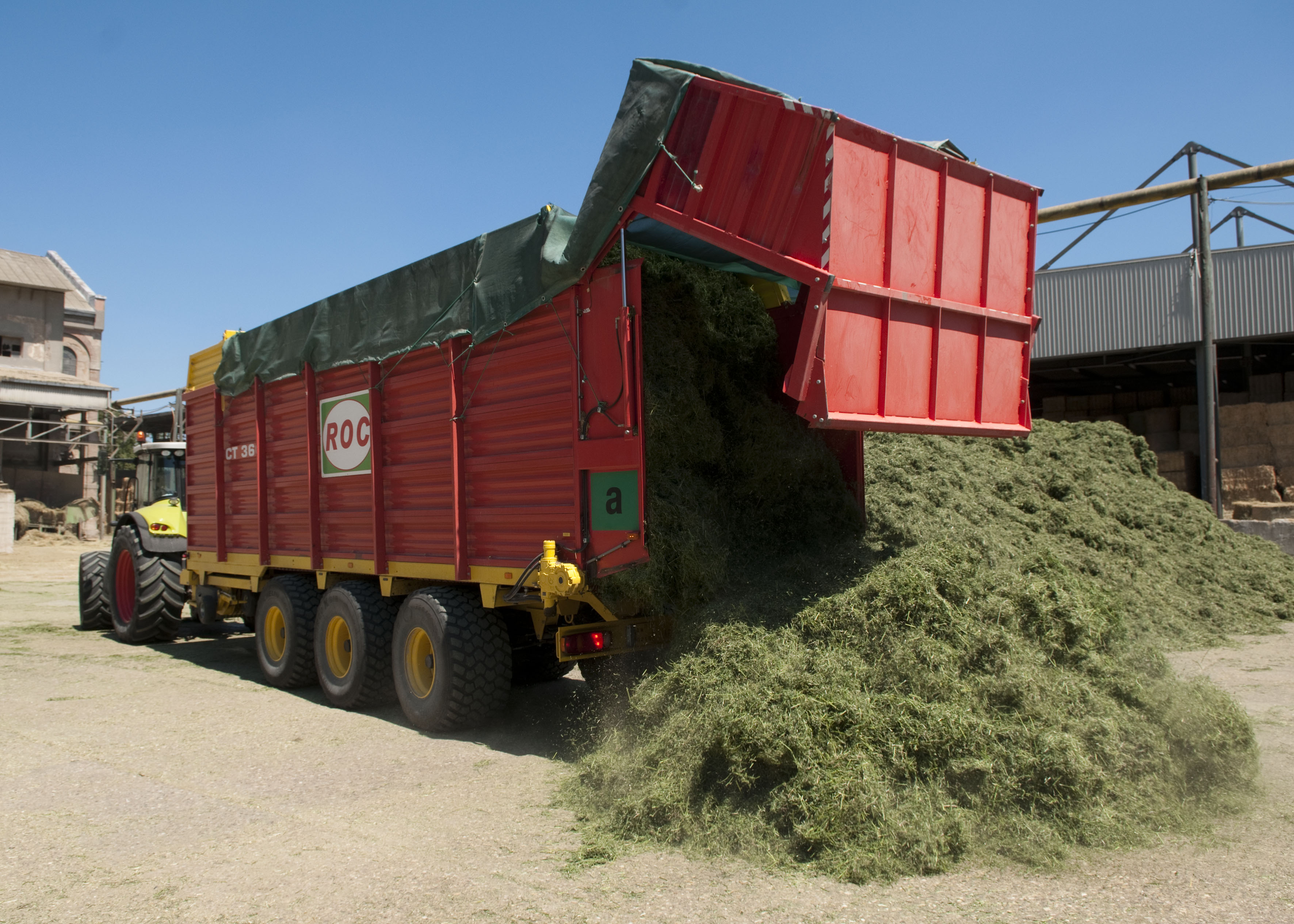 It is known that alfalfa hay is a good source of fibre and protein. Protein from alfalfa is top quality, however most of this component risks being lost at the time of cutting. The organs that are richest in protein in the alfalfa plant are the leaves, which are active from the point of view of photosynthesis and therefore feature a high presence of enzymes and proteins involved in this particular process. However, when hay is cut and dried in the field, it is easier for the leaves to become detached from the rest of the plant, with a subsequent loss of protein content and a proportionate increase in the structural component represented by the stems. Another critical phase is transport of the hay itself, a factor that can negatively influence the percentage of leaves present. In plants harvested preserving the integrity of every part, the leaf content represents up to 60% of total weight. It is therefore clear that the quality of alfalfa hay is closely linked to how the cutting and harvesting phases were managed.

The drying method also influences the content of other plant components, which are less well known compared to traditional parameters, but which it has been proven have an extra-nutritional role; these elements are an active part of the improvement of the state of health of the digestive apparatus, directly favouring the state of wellbeing of the animal. This involves some organic acids such as malic, citric, fumaric and aconitic acid, which have a protective action on the balance of the rumen ecosystem. In the presence of these substances, rumen microorganisms manage to overcome sub-acidosis conditions, thus managing to more efficiently remove the metabolites responsible for lowering pH levels. The presence of vitamins and carotenoids is also positively influenced by controlled drying. 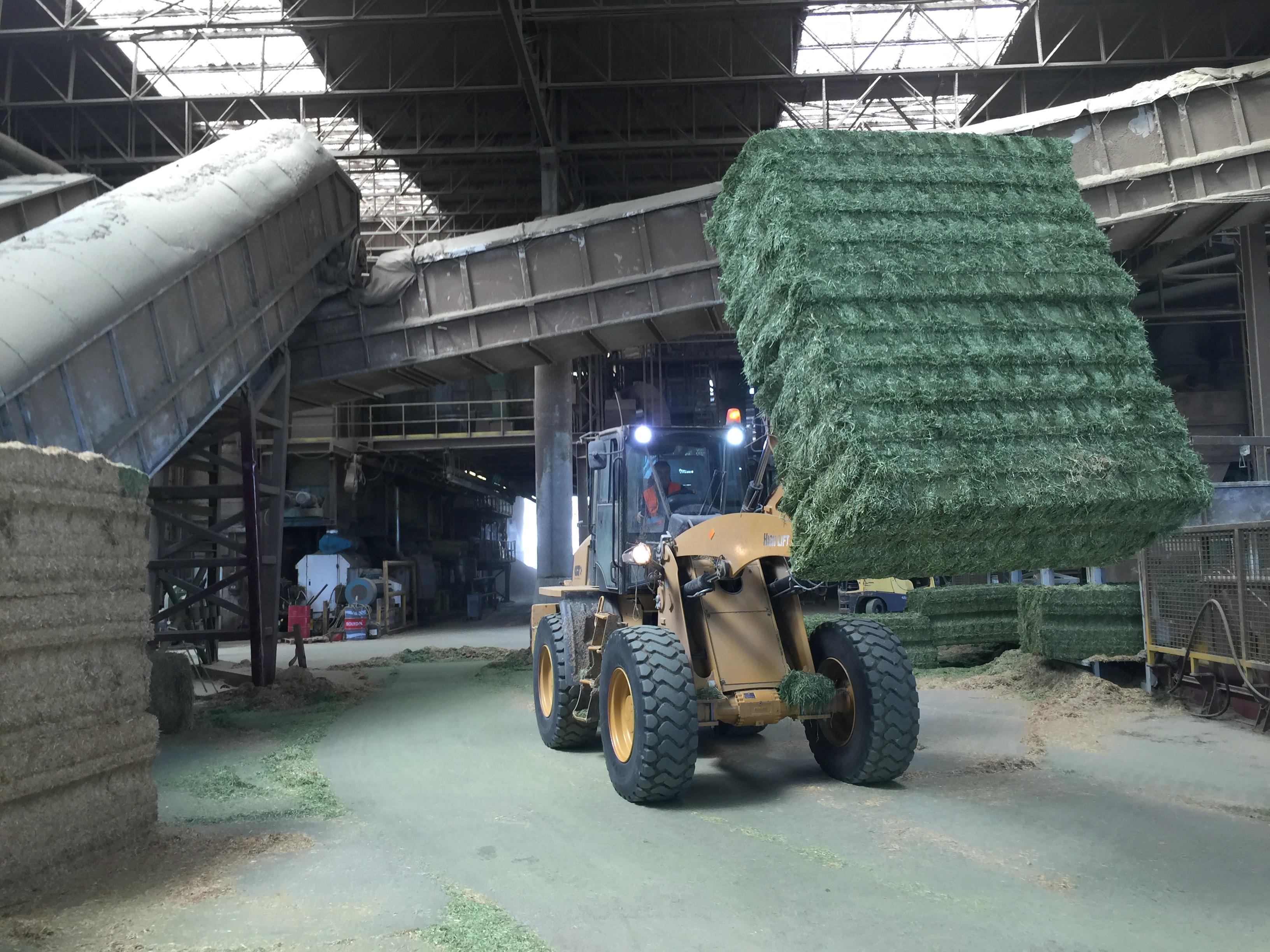 To obtain excellent zootechnical performances it is necessary for the animal ration to be based on top-quality forages. Their production through forced drying, compared to traditional drying in the field, in fact frees haymaking from seasonal weather events, making it possible to manage cutting based on maturity of the plant.
There are numerous advantages:
- higher quantity of leaves and reduced mechanical losses    during harvesting (higher nutritional value);
- significant reduction in contamination from dust and soil    (control of risk of disease and clostridial disease);
- absence of moulds and internal fermentations (avoiding      liver damage, lameness and infertility);
- conservation of extra-nutritional elements (organic acids,    vitamins and pro-vitamins). 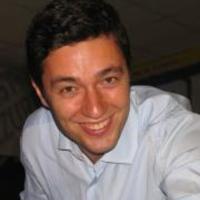